Joanne Gerow has worked for the Town of Liberty for nearly two decades, and currently serves as its Dog Control and Peace Officer. In short, Joanne handles all matters pertaining to dog control, animal cruelty, and other animal-related reports and incidents. She is on call 24/7, whether she’s at home or in her office at Catskill Animal Rescue (CARE), the organization she founded in May, 2014.

“I’m an animal advocate, first and foremost,” said Gerow. “If you have a New York State driver’s license, you can serve as Dog Control Officer. I had a vision of expanding upon that role for the Town of Liberty, and turned that vision into the awesome position I have now.” 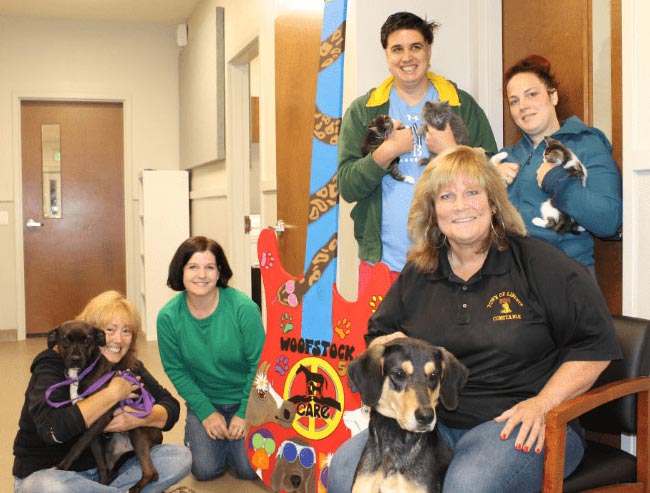 Let’s note the unique situations Joanne Gerow has found herself in over the years. She’s been down a 10-foot well to rescue a trapped fawn. She has been in a situation that called for a bear to be tranquilized. She trapped a rabid fox, and has encountered wild boar. She’s housed hundreds of cats, and estimates that her hands have touched “thousands and thousands” of animals over the years.

Her first step in expanding her role as Dog Control Officer was to take New York State’s municipal police training. Joanne earned the title of Peace Officer in 2006, which qualified her to undertake activities such as animal cruelty investigations.

“Technically, my job as Town of Liberty Dog Control Officer is to address issues of unlicensed dogs, dogs running at large, reports of bites or dangerous dogs, and situations like that,” explains Gerow. “I inform the public of their rights within the municipality. I’ve also gone to court on behalf of people in dog cases.”

“When I became a Peace Officer, my jurisdiction expanded to include animal cruelty investigations. We get calls every day from folks worried about the well-being of an animal – a dog tied outside with no food or water; a dog out in the rain or snow. I’m able to investigate those reports and proceed accordingly.”

Joanne also contracts with the Sullivan County Sheriff’s Department to handle animal cruelty cases. All of this, and she is the Director of CARE, which moved into a new location last year, thanks to the generous help of a local benefactor!

“We had a need in the county for an animal rescue,” said Gerow. “The need was dire, in fact, so I launched the rescue effort on my own. That evolved into my collaboration with Mr. Allen Gerry, which has changed everything.

Joanne says Mr. Gerry asked her to imagine her dream kennel; outfitted with anything she might want. She collected her years of hands-on experience with her own research and put it all together into a master plan and a wish list. She presented her dream kennel to Mr. Gerry, and he was impressed

A $1.5 million dollar donation from Mr. Gerry went immediately into building the new CARE facility – a state-of-the-art animal shelter that is addressing the critical lack of resources and services available in Sullivan County for unwanted, neglected and abused animals. Joanne says she made a promise to Mr. Gerry that CARE would be everything she told him it would be.

“And, you know what? Honest to God, it’s ten times better,” she said. “We want for nothing. Everything is new. Everything is top of the line. We have some County funding to hire if need be, but we’re primarily staffed by our amazing volunteers, and we’re all dedicated to the animals of Sullivan County.”

CARE has one part-time employee who handles regular morning kennel cleanings. Joanne says “tons of volunteers” lend a hand, with upwards of 40 volunteers who come in regularly. CARE may be a sanctuary for animals, but it has also become a place where animal lovers can spend time together, doing something for animals in need and enjoying the company of others who feel the same.

“My goal since childhood has been to help animals,” said Gerow. “So, to be able to do this work, to develop this program and make the contacts and gain the resources that I have? I get goosebumps. Look what we have ended up with!”

The Dog Control & Peace Officer can be reached by phone at (845) 866-3366. Joanne Gerow’s office is located at CARE, 263 Old Monticello Road in Liberty. To schedule a shelter visit during business hours, please contact CARE by phone first, at (845) 747-9457. CARE is online www.catskillanimalrescue.net.