The History of the Keller Memorial, Town Government Center

The Keller Memorial, Town of Liberty Government Center, formerly the home of Otto E. and Polly Young Keller located at 120 North Main Street, Liberty, N. Y. with its tree laden lawns remains to all outward appearances, with the exception of the few necessary alterations, much the same as when the Keller family occupied the dwelling as their home.

The house and grounds have changed little since the early part of the century when the home was rebuilt and the grounds were developed much as they exist today by James Chandler Young.

The prime forces in retaining the property in the later years were two sisters, Mrs. Polly Y. Keller and Miss Louise Kimball Young, daughters of James Chandler Young and Emma Crary Young who were responsible for making most of the alterations and additions to the structure as we see it today. 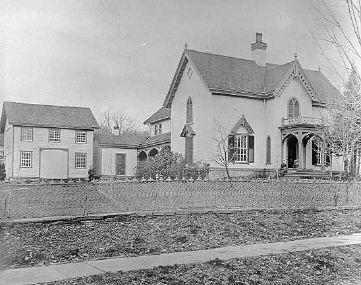 The front and central section of the house was originally built by Dr. John D. Watkins in the year 1836 or close thereto. Dr. Watkins who was born June 7, 1806 near Campbell Hall in Orange County was a graduate of the College of Physicians and Surgeons at Fairfield, Herkimer County. He began his practice of medicine at eversink, later moving to Bloomingburgh and finally settling at Liberty, where in 1833 he married Harriet Young, a daughter of Joseph Young. He went into the mercantile pursuits with his father-in-law and later bought out the stock of goods of the late Caleb Buckley and commenced business in the settlement on his own account as a merchant, with John Davidge as a partner .

When Dr. Watkins built the “Watkins House” as it was known in those days, it was vastly different from the structure as it exists today. The front of the house was quite plain, having a small porch centered at the middle extension that houses the front door. At the top of the existing front steps is a large thick flag stone which served as the floor for the small porch as built by Dr. Watkins.

The existing middle section or rear ell at that time did not have the large screened sleeping porch on the second floor which Mr. Otto Keller put on and the wood-house which now stands directly in the rear of the main building stood on the lawn to the south and faced Main Street.

The entire frontage on Main Street at this time was adorned by an ornamental iron fence. In the summer of 1914, J.C. Young had the existing stone work done and the old iron fence was sold to Frank and Phoebe Edmonds to adorn their property at the corner of Chestnut and Clements Streets. The Edmonds place was later purchased by Dr. Luther Grant and eventually made into his home and office complex.

Dr. John D. Watkins was a very prominent person in the community. In 1843 he was appointed the first County Supervisor of Schools and in 1847 he erected two buildings on Academy Street (in the vicinity of the old Lenape Hotel) and established the Liberty Normal Institute for the purpose of training teachers, which was the only one in the State at this time. Between 1857 and 1861, two fire companies were formed in the area, Watkins Engine #1 and B. W .Winner Hook and Ladder #2. Dr. Watkins gave the pumper to #1’s to get them started. He also served as Town Supervisor in 1853 and 1854 and later served as a State Senator on the Democratic ticket. Dr. Watkins also donated most generously to the Liberty Methodist Church when it was established at its present site on North Main Street. The Doctor’s picture hung on the wall of the Keller parlor, now the Town Clerk’s Office, until a couple of years ago when it was given to a Dr. Brown, a great grandson of Dr. Watkins. Although his picture is gone and his home underwent great changes from the time that he dwelt there, the evidence of him is left by the fact that all the doors in the older section of the house have their door knobs closer to the floor than the average -this because although the good doctor was “large” in many respects, he was himself, a small man in stature.

Dr. Watkins died on June 5, 1878 and is buried in the old section of the Liberty Cemetery. Later on October 12, 1880, Harriet Watkins, his widow, conveyed the property to her nephew, James Chandler Young. The land conveyed at that time consisted of the house lot and a barn lot on the easterly side of Main Street where the barn stood, some distance down from the sidewalk and near the brook. The barn was painted in the same shades of brown as the house and was a fairly good sized structure . It was destroyed by requested burning by the fire companies after being purchased by the Sullivan County National Bank.

When J.C. Young acquired the house in 1880, he was not yet married and he hired a young drover by the name of Arthur Grant to stay at the house and look after the place for him. Mr. Grant remained with the Young and Keller families for over half a century, until his death in April of 1931.

On September 7, 1881 Mr. Young married Emma Crary at Sands Creek, about two miles above Hancock in Delaware County. Emma was the daughter of Horace H. Crary and Polly Burr, who were both natives of Liberty. Mr. Crary had a large tannery at Sands Creek at this time.

Following their marriage, Mr. & Mrs. Young returned to Liberty to set up house- keeping at the house which was to remain their home until their death.

Dr. Watkins and John Davidge had a general store where the former Frank Mauer Market was, now the building occupied by the Montgomery Ward Store. J.C. Young, together with Uriah and Charles Messiter purchased the business from his widow and went on to finally build the large three story building at the corner of North Main and School Streets, now occupied by the Sullivan County National Bank.

The store at that time was known as “Young, Messiter and Dodge” and in later years before it went out of business was known as Keller’s Department Store.

Mr. Young was a great businessman and his talents were quite diversified. Besides being a merchant, he was a banker (one of the founders of the Sullivan County National Bank) and a most successful dairy farmer.

It was during Mr. Young’s ownership of the house that most of the improvements and remodeling was done.

Mr. S.O. Lacey, an architect from Binghamton, designed the bay windows with their bowed or curved glass, and Eagan and Ahrens, local carpenters, built the porch across the front about 1889 or 1890.

The front bedroom windows above the porch were added at a later date . 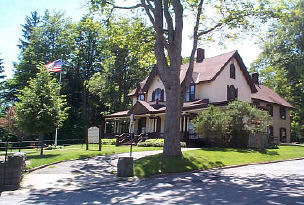 The fountain, a boy and girl under the umbrella, has been on the front lawn since probably about 1883 and water dripped from the umbrella until the last few years when the old “Winner spring line” that led from a spring in the Sprague Avenue area gave out.

J.C. Young and his father gave Memorial Hall to the Liberty Methodist Church in memory of his mother Louisa Kimball Young. It, too, was designed by Mr. Lacey, the same architect who worked on his home .

Mr. Young died at his home on December 12, 1914 and the spacious house was much too small to accommodate the hundreds that came to pay their last respects. The floral tribute at that time was the largest ever seen in the village. A very fine portrait of J.C. Young hung in the main entrance hall and is now in the possession of James Chandler Keller, his great grandson. Although he is long gone, the house remains today much as he left it.

Following the death of J.C. Young, his wife Emma and daughters. Polly and Louise, remained at the house until Polly married Otto E. Keller on June 17, 1915 and left to start a home and family of her own in a house on Law Street across the road from the homestead.

Mrs. Young died Apri1 26, 1916 and again the home was too small for the many friends and mourners. She was described “as a unique personality of unusual grace and queenly loveliness. Her supreme joy of life was the church of Christ – her Christianity both real and ideal.”

Following the death of Mrs. Young, Louise was left alone for a short time until Mr. & Mrs. Keller returned to the homestead with their family, where they remained until after Louise’s death and finally due to the failing health of Mr. Keller, they left the big old house to be near their children in Connecticut.

Mr. Keller, who died December 4, 1970, was born in New York City and was orphaned at an early age. Due to illness he was sent to the country for the summer and wound up working in the Liberty area. He eventually acquired the Young, Messiter and Dodge firm after the death of J.C. Young and changed the name to Keller’s Department Store which he ran for many years. A few of his other local business interests included building the large building on North Main Street now occupied by the Barbuti Furniture Store, being president of the Sullivan County Finance Corporation, and a director for many years of the Sullivan County National Bank. He is remembered as being a man of ample stature, distinguished looking, a gracious personality and being a leader in the business, social and civic life of the Community.

Russell and Grace Garrabrant, who worked for the family a couple of years before the Kellers left for Connecticut, stayed as caretakers, keeping the house and grounds in immaculate condition and to all outward appearances, the Kellers were still at home.

Shortly after the first of January 1976, there were rumors that the house was to be given to the Town of Liberty for office purposes and this was later confirmed in the local papers.

About mid summer, the family began the staggering task of removing the furnishings and the general accumulation of the years and years of occupancy by one family.

On August 25, 1976, the deed conveying the lands to the Town of Liberty was signed by Polly Y. Keller and the house and grounds officially became Town property.

After the Labor Day weekend all was gone and the house and grounds awaited the coming of a new cycle of events in its existence.

Architect Martin Schwartz of Rock Hill was hired by the Town Board and plans were drawn and put out for bids for the necessary renovations to be made on the structure so that it might be converted into public office space, yet retain as far as possible the dignity and graciousness of the fine old home.

On March 10, 1977 bids were awarded for the general contract, electrical contract, and the contract for the sprinkler installation. Ralph Manzi, doing business as DeRoosa Builders, Inc. of White Plains, New York, received the general contract. Ross Electric of Liberty did the electrical work and the Sullivan Sprinkler Service Corporation of South Fallsburgh put in the sprinkler system. Marty Hoffman and William Nicoll did an excellent job on the interior painting of the building .

While the house was in the remodeling stage, the sad news came from Connecticut, that Mrs. Keller who had been ill for a short period of time had died on Apri1 24, 1977. A Service of Remembrance was held at her beloved Methodist Church and was attended by her many friends. She was buried beside her husband in the family plot in the Liberty Cemetery.

Although Mrs. Keller didn’t live to be present at the dedication, we shall remember her for the loving, generous, kind and thoughtful person that she was in her everyday affairs.

Due to her generosity, and that of her family, the historic house and grounds will be preserved and the Town has its needed offices, and we, the people of Liberty, have something to be proud of.