LIBERTY, N.Y. (October 10, 2019) – The Town of Liberty has announced that Phase 1 of its sign blight initiative, undertaken in partnership with the Village of Liberty, has been completed. Town of Liberty Councilmen and Village of Liberty Trustees have worked collaboratively from the design and planning stages, through funding and implementation to replace outdated – and in some cases dilapidated – signage with new, visually appealing installations that have been completely grant funded.

Signage installed during Phase 1 includes two new gateway signs, as well as eight new directional wayfinding signs throughout the Village and Town of Liberty. One gateway sign is located on Route 52 between Denman and Hysana Roads, near Stephenson’s Garden Center, and includes the Town name and the slogan – “Live. Play. Do business here”. The other gateway sign has been installed on Harris Road in Ferndale, near Sullivan County Animal Hospital. The directional wayfinding signage serves to point travelers toward Liberty’s downtown district, among other key recreational locations.

“Removing these eyesores and replacing them with new signage that is modern in appearance and clean has been a goal of ours for some time,” said Town of Liberty Supervisor, Brian P. Rourke. “They are a significant improvement to the gateways of our community, both aesthetically and physically, and have been 100 percent funded by grants.”

Two 2018 Sullivan Signs Grant Funding Awards from the Sullivan County Planning Department have helped make the upgrades possible. The Town of Liberty was awarded $7,500.00, while the Village received its own $7,500.00. An additional $10,000.00, received as a 2016 Sullivan Renaissance Silver Feather Award Grant, was also earmarked for the project.

“The combined grant money we secured for this project has meant no financial outlay by the community – we’ve applied zero tax dollars, managing to carry out a major civic beautification project with zero impact on our tax payers,” said Rourke.

As the Town and Village proceed into Phase 2 of the project, Department of Transportation attraction signs will be consolidated, along with the addition of more parking-related directional signage and two more directional wayfinding signs. During a recent meeting, the Town of Liberty Town Board also approved a large Welcome to Liberty billboard. Its retro Catskills design will be unveiled soon.

“This has been an important project to me during my time as Supervisor, and I am proud to see it coming to fruition,” added Rourke. “I hope we can keep this positive momentum going forward, and get the rest of our sign blight cleaned up.” 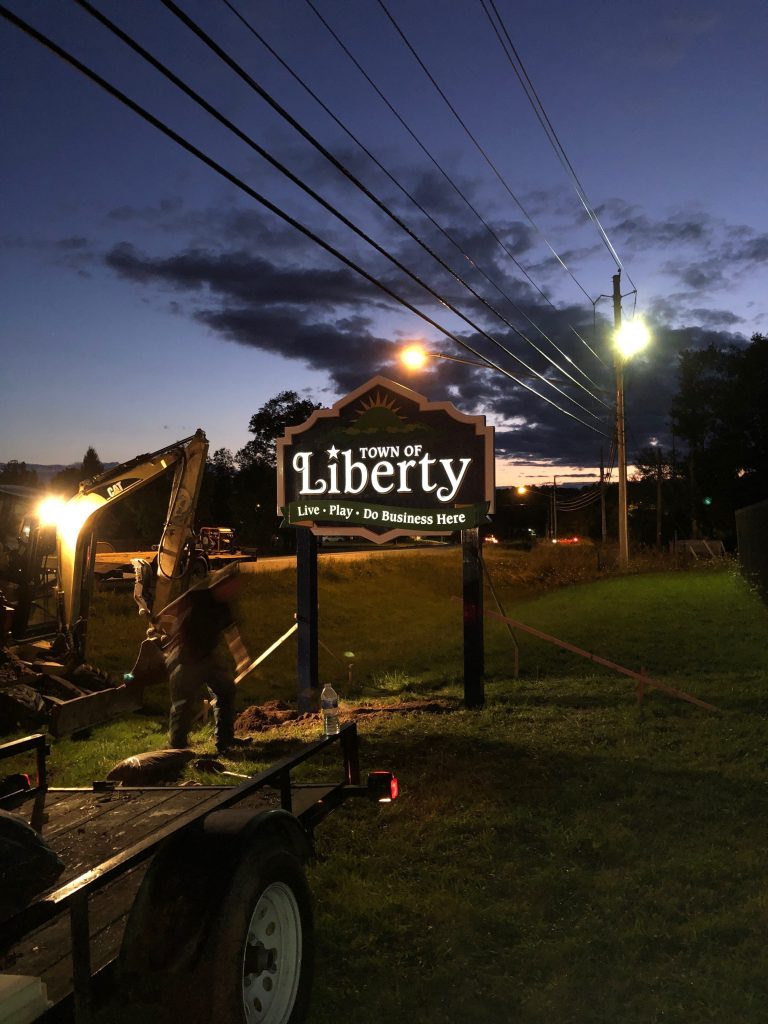